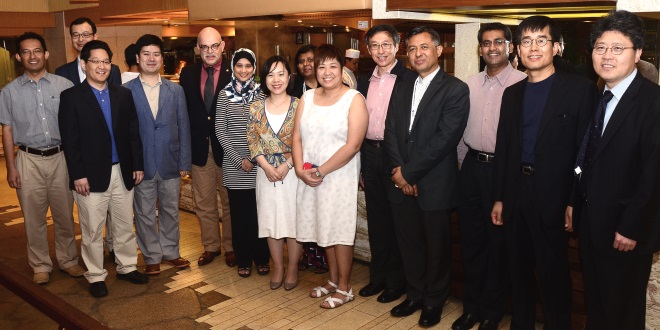 by Dr Amran A. Rahman

KSR-MCoR Friendship 2014 01 [300]The College of Radiology was honoured to be the host of KSR-MCoR Friendship Symposium. The theme of the symposium was Cardiovascular Imaging. The Korean Society of Radiology (KSR) through its sub-society, Korean Society of Cardiovascular Imaging (KOSCI), sent 6 speakers for the symposium. It was a 1-day symposium which consist both lectures and case presentations given by speakers of both countries. 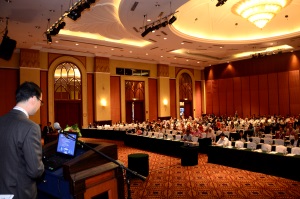 The day started with a minute silence in respect of the tragedy of MH370. The morning sessions chaired by Dr Amran covered radiation protection, anatomy and the common indications of cardiac CT. Following tea break, the session was chaired by Professor Yang Faridah and touched upon the uncommon and advance indications of cardiac CTA and an introduction to cardiac MRI. 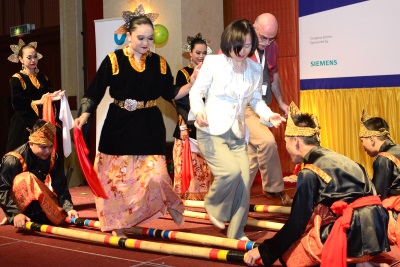 There was also a plenary lecture given Tan Sri Dato’ Seri Dr Robaayah Zambahari, CEO of IJN, representing National Heart Association of Malaysia, as a late replacement for Dato’ Dr Azhari Rosman. She gave an overview of Cardiology practice in Malaysia.

The afternoon session was chaired by Dr Norzailin and continued with topics of cardiac MRI. Following tea break, clinical case discussion was conducted with a total of 8 cases presented. One of the cases was cardiac manifestation of Chagas disease! The session was moderated by DrYusri and DrSuzana.

Generally, the lectures were of high quality and very informative. The lectures covered a broad indications and usage from the basics until the advance for both CT and MR cardiac. The sessions were well attended and despite running late, the delegates were glued to their seats. Following the symposium hopefully, cardiac imaging will continue to grow interest among the radiology fraternity.

College of Radiology (CoR) organised the congress dinner in conjunction with the Annual Scientific Meeting(ASM) 2014. This was held on 4th of April at Putrajaya Marriot Hotel & Spa. The dinner was fully sponsored by Siemens.

The event started at 6 pm with the arrival of the local and foreign guests. The foreign guests were delegates from Korea(6 members), Japan (1 member), CEO of Siemens Malaysia and Scientific speakers. 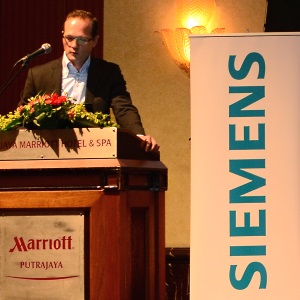 At about 6.45 pm, the Master of Ceremony(MC) for the day, Dr Daniel Wong started the event by welcoming the guests.

The first event of the day was a talk delivered by Mr Maxim Mamin, CEO of Siemens Malaysia. He spent about 20 minutes, updating the guests, on future of Siemens and their future plans in healthcare.

This was followed by presentation from the Korean colleagues on ASCI 2014, inviting us to join them in Jeju,Korea. Further audio-visual presentations were on future events to be held in Malaysia by CoR. They were represented by Dr Yusri (for ASCI 2015), Dr Shantini(for ABDA 2015), Dr Zaleha(for AOSPR 2016), Dr Amran (for AAR 2017) and Dr Jeyaledchumy (for MySIR-AAFITN 2018). 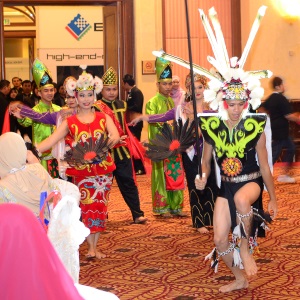 The tribal dancers from Sarawak ushered in the dinner presentation. 7 course dinner was served to the guests. The tribal dancers gave a wonderful performance for another 30minutes.The dance ended with our guests joining them in trying out their skills in dancing and “blow-pipe” shooting.

Dr Daniel, our MC entertained us with jokes, quiz and guessing the picture game. Three prices were given out to the best performing table.

Mr. Rizal Van Geyzel, an upcoming stand-up comedian from Malaysia gave a wonderful performance. He entertained the guests with good humour, revolving on the lives of ordinary folks.

The final event of the gala dinner was the lucky draw. Three prizes were given out to the winners, courtesy of Putrajaya Marriot Hotel & Spa.

Our MC thanked the fellow performers, guests and others who made this dinner a success.

Dinner officially ended at 9.30pm. The CoR is hoping to make this an annual event.